On the NEA Clinton Endorsement

Over at Mike Antonucci’s EIA blog, he has the break down of the NEA voting regarding the early Clinton endorsement.  Pretty interesting to look at.

The vote on Thursday by the NEA PAC Council to endorse Hillary Clinton required a simple majority, and was reported to be 82% in favor. But now we have the roll call vote by state and caucus, and things aren’t so simple.

Each state’s votes are weighted by the amount they contribute to the PAC, plus each major NEA caucus gets a single vote, as well as the Executive Committee members and two members of the Board of Directors. There are 4,028 votes in total. You may have to zoom in to see the tally, but there are a few curious results. 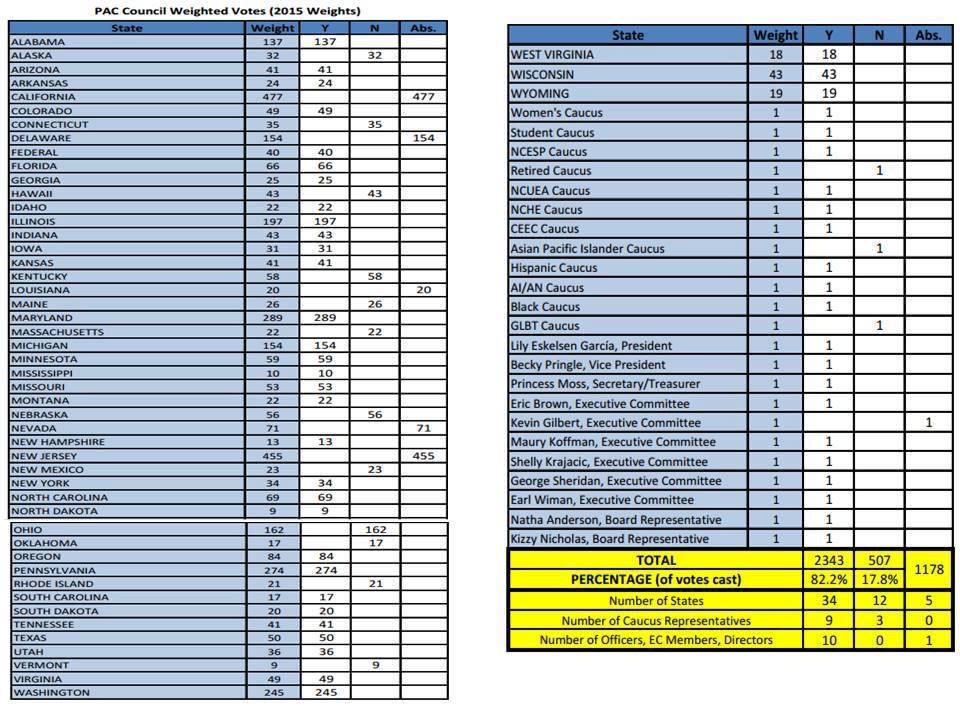 The caucuses that voted no were the Retired Caucus, the Asian Pacific Islander Caucus and the GLBT Caucus.

The big mystery is why five states abstained, including the two largest, California and New Jersey (the others were Delaware, Louisiana and Nevada). New Jersey was especially vocal about not supporting an early Hillary endorsement.

If all the abstentions had been “no” votes, the simple majority would still have been reached, but the margin would have been reduced to 58.17%.

You saw the uproar that occurred on Friday and Saturday. Imagine the pressure on the board of directors – which required a 58% majority to endorse – if NEA’s Sanders supporters felt they were that close to defeating it.

It was close even if you just look at state affiliates plus the Federal Education Association – 34 in favor, 17 against or abstained. That’s still close enough to prompt internal lobbying and at worst reduce Clinton’s margin of victory to the low 60s, which would have greatly diminished the triumphant tones we heard yesterday.

What’s next? NEA conducted its orchestra with skill and got what it wanted: the authorization to spend dues and PAC money promoting Hillary’s candidacy. Whether that will turn out to be a Pyrrhic victory is entirely up to what the dissidents do next. An NBI ain’t gonna cut it.

A few things to note…

← Some Links to Check Out
PJSTA Resolution in Opposition to Receivership →

1 Comments on “On the NEA Clinton Endorsement”